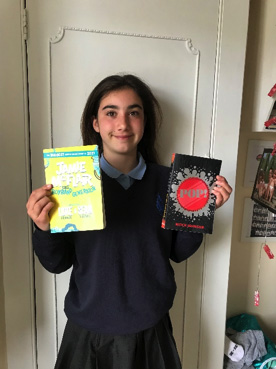 Fiction, but about real-life events like climate change, global warming and the great pacific garbage patch which is where lots of plastic fills the sea and shore.
Main Characters: Queenie de la cruze, a girl who loves drinking Mac-tonic and Mac-tonic the biggest company in the world.
My favourite character is Queenie as she is selfless, brave looks out for others and is always doing the right thing. This story begins when Queenie and her mother and brother move from Kansas to North Nitch when they get there. It is horrible and the beach is full of plastic empty bottles of Queenie’s favourite drink mac-tonic . Two people come past her house and were picking up rubbish got her thinking. Then she finds out her favourite drink is no longer a thing as the people who know the secret are dead. She tries picking up bottles she picks up the Mac-tonic recipe without knowing. Then the Mac-tonic corporation comes round and wants the recipe. Queenie burns it and runs away. She gets put in a room called area 51 but escapes and after that she has an interesting but exciting adventure…  She finds out a lot of interesting things on her adventure like; the two rival companies Delixir and Mac-tonic work together, the boy who was in the room with her and went on the adventure was the head of Mac-tonic son.
Rating: 4/5 stars
Age rating:7+ as it’s a gripping book that I could not put down and as it was funny it also taught me a lot about climate change.
My favourite part was when Queenie won the court case.

Jamie Mcflair VS the Boyband Generator
by Luke Franks, paperback £6.99 for 8-12 year-olds

Set in a town called Crudwell.

Main characters: a very rich uncle with a very dangerous machine and a young girl with her friends who save everyone. The girls name is Jamie Mcflair and her mad uncle is Glen Jones, but in the book he is known as Barry Bigtime as in show business people choose more exiting names.

This story begins in Barry Bigtime’s Chateau when he is told his business (his tv show and his boy bands) were not doing well so he wants to make a new great boyband.  He invites a YouTube superband and just by coincidence, Jamie’s favourite band – BNA, to his TV show.  On his show, he throws a pair of pants that have been dipped in chocolate milk that makes the band a laughingstock. After he invites all the best boybands to a party and gets out the boyband generator …. when this is used everything goes crazy.

My favourite character is Jamie as she is very brave and is always trying to help others.

Rating: 5/5
Age rating: 7-14 years because it is funny chapter book that most ages would enjoy.
This book made me feel lots of emotions, mostly giggly but sometimes it got quite tense and left the reader wanting to find out more….

We are thrilled to announce that our favourite celebrity author Ben Miller will be returning for a fantastic festive book signing.

He will be signing all of his books, including “How I Became a Dog called Midnight” and hot-off-the-press “Diary of a Christmas Elf”.

His signed books are the perfect personalised Christmas present - we can’t wait!