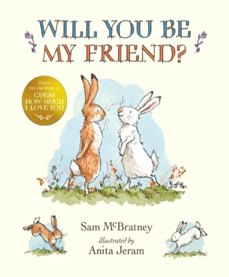 Big Nutbrown Hare is busy, but Little Nutbrown Hare wants to play so he goes off exploring on his own. He discovers another hare in a puddle – then realizes it’s his reflection. He spots his shadow and wants to race it – only to find it’s just as fast as him.

Then up on Cloudy Mountain he finally finds someone to play with: a little snow white hare called Tipps. And she’s real!

Due to covid we are currently closed.

However, I am calling on all my lovely loyal bookworms, to enter this incredible competition!
http://Youngsportingwonders.com

It would be great to see you when we reopen with your winning tokens, to buy some brilliant new books.